Sounds weird to say retire when I just turned 40, but yes in 100 days I will compete in my second and last Ironman triathlon.

The amount of focus and energy I put into my training 2012 to 2014 for my first IM is not there any more and I don’t see it coming back in the near future.  Crossing the finish line back in August was like running off a cliff. A really tall one that took approx 38,920km over nearly 1700hrs (1600km swimming, 18660km biking and 3050km running) to reach passing through race after race. I pushed my limits and managed to do things I never would have thought possible four years ago.

After the race I took six weeks off to recover, but during those six weeks I unwound too much. I gained weight, change my daily routine and when it was time to get back to work that spark was no longer there. I am an Ironman. I don’t feel like I have more to prove. Sure it would by nice to go under 11 or even 10 hours, but if I didn’t get there with my 2014 training I don’t even want to think about how much time I would have to train to cut the last 24-84 minutes.

Something that I have come to realize over the last five months is the I love to train, but I prefer not to train alone. From what I have gone through triathlon is a very lonely sport when one has three little girls and full time job.

Swimming with Masters will be something I continue to do. It’s group training and I enjoy helping others reach their potential in the water.

But August 16th my triathlon bike will go on the market. So if you are out after a nice tempo bike with FLO 60/90’s to next year let me know. 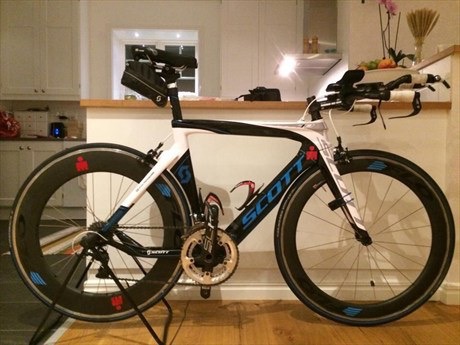 So now I am mustering up all my energy into the next 100 days of training with focus on three potentially four races: Stockholm Swimrun, Kustjagaren, Kalmar Ironman and one undecided.

I know my triathlon friends will think this is just a phase, but training at the CF Box in Växjö is seriously the only training that I look forward to each day. I can either join a class or meet up with friends and do something together.

And who knows maybe I’ll get hooked on Swimrun.
Going to jump in the lake soon, hoping OW swimming will give me the kick in the butt I need.