My day started by waking up at 05:15 and thinking, had I not written on facebook, or talked on the radio the day before about doing this swim, I might have not gone to the pool. I have barely managed to swim twice a week the last 14 months, and was in the desert most of October, but I was not swimming for myself but to help raise awareness for Doctors Without Borders. I make it down to the hotel buffet by 05:45 and slower eat my eggs and bacon, lots of eggs and bacon along with some OJ and coffee.

I get to the pool and the other swimmers are also arriving and getting ready.  Since I had not planned on resting so much I only had my swim bag with me, so just took a small spot in the stands. I get my gels and bottles out of my bag and place them under the starting block. Not much talking going on, but it was a happy bunch looking forward to the day, no matter if it was 6, 12 or 24 hour swimming.  Those swimming 3 hours did not start until 13:00

The clocks hits 07:00:00 and we start. The first 1600m went long and easy.  I knew that the guys I was swimming behind were going to be getting up soon and resting 30-35 minutes while I kept swimming, so there was no need to swim faster than them. The eventual winner and runner up swam the first 1600 under 23 minutes.  I came in around 24:33, meaning my first 1500 of the long swim was just around 23 minutes. The last time I raced a 1500m in long course I had 22:36, so that meant I was in better form today than I was a year ago, but what would it mean to the rest of the long day ahead of me.

As the others start getting out of the pool i continue with my next 1600m. Total time around 50 minutes, and I feel great. I swim another 400m and then stop on the side to wait until 08:00 and the others were going to start their second 1600. At this point I stop thinking about the others and just try to focus on my own task. But every time the others finished their 1600, it was hard not to notice as the pool kept getting emptied.  Luckily for me, Kari Martens was also going to attempt to swim as long as he could in 24 hours, so I was almost never really alone in the water. The 09:00 and 10:00 swims for the others really keep me moving. before each start of the 1600 for the others i would stop and rest  3-8 minutes.  I was swimming nearly the same pace as the 3rd and 4th guy in my lane, and figured I would try to stay with them as long as I could. After 3 hours and 50 minutes I had swum 13 km or nearly 8 miles. But I knew I I could not keep that up for another 20 hours, and I was starting to get hungry.  So I get out of the pool, dry off and get some food. Already after 15 minutes, I say to myself, this was not a good idea. But as the swimmers in the pool start finishing their 5th swim I start to get ready to jump in and continue to see how far I can swim in 24 hours.

The second swim starts off solo, since I jumped in around 11:40, but again just like before, just before the start of the 12:00 swim I take a short pause to follow the others, but this time I move over one lane from the 24-27 minute swimmers to the 27-28 minute swimmers. It was a better fit to my long swim and more comfortable pace. During my first swim I forgot to pause my watch, so I had a few extra minutes than actual swimming resting, but during the second swim I remembered. So just before 16:00 I get out of the water, I had managed to swim another 12km reaching 25km in just over 7:34 active swimming through 9 hours. I even remember looking at my watch as I turned at 21.5km and had 6:44, the same time I had in my first 21.5 OW swim 3 years ago. At this break the pizza had arrived, so I was able to eat a light dinner and after another hour or so I was ready to get back in the water.

The third swim was going to be the toughest, since the 6 hour swimmers had gone home and the 12 hour swimmers were going to be finishing up soon. the third swim was less eventful. But just around 19:38 i started to get dizzy, slightly sea sick. So I decided that at my next break I would try to get a massage. 14 hours after the start I had been actively swimming for 10:58 and was up to 36.4km (nearly 23 miles). I had now officially broken my swim distance record.  Previously just over 10km in a 25m pool and even the 27km in a day OW Vidösternsimmet plus 5.5km till. During the break I get a much needed massage on my neck, and shoulder blades. I get in some more food and start to think strategy for the remaining 10 hours. I decided my next swim would only be until midnight.

The fourth swim starts just before 22:00, this time I do not care about starting at 00 with the others because by now there are not any in the water swimming at my tempo. either I have slowed down, or the others in my tempo were finished. Knowing that I was only going to swim until midnight made it easier to push myself. So just before the other swimmers were going to jump in for number 18 I climbed out of the pool. I had been actively swimming for 12:34 and was just 300m short of a marathon. 41.9km. I had managed to swim the 38.4km (24 “miles”) the others were going to swim, so i started to feel good about myself, and knew that for the next 7 hours I was just swimming “bonus” meters. During this break I noticed a mark on my foot.  It took a while before I could figure out what it was and how I got it.  It turns out, that when I “kick” my left foot crosses under my right so that my left heel, hits the top of my right ankle.  In a normal 90 minute workout it doesn’t show, but today it was obvious. This was a short break, since I felt fine and was not hungry or tired.

The fifth swim was mostly uneventful, Kari had moved over from lane 2 to lane 8 so I could see him better, and then around 01:00 he had to get up to take a longer break. I am now just swimming for fun, and enjoying every moment. and of course I started to get more and more curious how it was going for the other 24 hour swimmers. The fifth swim was my shortest of the event, getting out of the water around 02:30, 19.5 hours after the start with 14:14 active hours of swimming and reaching 47km (over 29 miles).

For some reason this break was the longest, but I remember the least about it. I don’t even remember when I got back into the pool.  The only thing I know is that during the 3 hours that passed from the start of my fifth break and sixth break and I had only managed to swim 5km. So I am guessing my last break was around 90 minutes. I was at 51km and decided to only swim one last km before 07:00.

As I get back in the pool for my final swim, I get information that Kari was at 48.8 km and was planning on stopping at 50km.  Great I think, swimming just one more km will get me to 52, two more than him.  Since I did not jump into the water until 06:00 I saw that Kari had swum a few lengths between the time I got the information and the time I started swimming, so now I have no idea where he is in relation to me, but I know he can not do much more than 3km in the remaining. So once I get to 52km I stay in the water and watch Kari. When 06:30 comes and he is still in the water swimming, I decide to swim 100m for every 100m he swims. After 3 extra 100’s his wife walks over and tells me Kari will swim one last 100 for an even 51km, so I swim one last 100 just to be on the safe side and end up with 52.4 km (32.5 miles) with 15:55 active swim time. 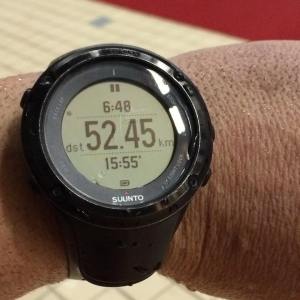 It was a great experience and for a great cause. I hope this swim manages to bring in a little money that will help those who need it more.

The results of the days swimming are now up on Simma24.

This was by far the longest training day in my life. All in all I am happy with my swim, and of course swimming over 50km. But the more and more I think about how it went, I know I could have done more. After 9 hours I had only rested 1.5 hours. After 14 hours my rest was up to 3 hours, around 17 hours I had rested 4.5 hours.  After 19.5 hours my rest time was over 5 hours and as I took my goggles of the last time I had rested nearly 8 hours of the 24 hours. The next time I swim 24 hours, I will either do the planned 24 x 1600 m/hour like the rest, or I will swim 2 hours and rest 30 minutes. That would get me closer to 19 hours of swimming and 5 hours of rest, which based on Saturday and the way I feel today is totally doable.

I am not sure if the site works for my friends in the US, or out of Sweden, but if you have taken the time to read my blogg today, then also please the time to click on the donation link below and help us to help others.

Donations to Doctors without Borders through Simma24

Me: Iris help me not to get any chocolate today.
Birthday Dinner with Jeanette
They say a picture is worth a thousand words.
Hej Växjö kommun