So 10 months after TYR Warriors (Fredrik Björn & I) sign up for this summers Swimrun races we finally made it to a starting line. Last Saturday we started and finished the 28km Stockholm Swimrun.

I arrive to the Stockholm train station just before 2 pm and Fredrik’s train comes in at 2:40 pm. We take a taxi out to our hotel, Best Western Time Hotel. After getting checked-in to our room we decide to see if we can find the starting area, to reduce any stress we might have the next morning.

We make our way towards Brunnsvik, and then follow the edge of the “lake” making guesses as to where to will be jumping in and getting out of the water. After nearly two hours of walking around we finally find the starting area. It’s nearly 6pm and I have not eaten since 10 am on my flight from Dubai. It takes us another 40-45 minutes to get back to the hotel, but we stopped at a gas station and got water and ice-cream, so now I was in no rush to find a place to eat dinner.

Again we leave the hotel, this time heading into town and we look for a place to eat. Nothing seem to be calling out, eat here, so we decide on pasta. I ordered spaghetti and the guy says, oh you are in luck that was the last one. So Fredrik orders a pizza. After dinner we walk back to the hotel, check our equipment one last time and then hit the bed around 10 pm.

We wake up early and get down stairs for breakfast just before the Saturday morning rush. Today is not only the Stockholm Swimrun, but also the last Swedish Royal wedding for the next 20+ years. So the hotel is full international guest. After breakfast we go back to our room and relax. Just before 10 am we head to Addnature so Fredrik can get a whistle, since he left his at home. By 10:45 we are on our way to the start by 11:30, we are in line to get our racing bibs. Shortly after we pick up our lunch, which I am sure was really nice for most people, but no something for me.  It was a cold asian wok type salad with black egg noodles and raw veggies. The pre-race meeting was scheduled for 12 was moved up to 12:10 so I make my way over to the massage tables and get a middle back massage, but looking back, I should have had them massage my lower back ( I will get back to that).

The pre-race meeting is in english with racers from 7 different countries. Lots of fun with the swenglsih and a happy group of swimrunners. When the meeting is over, everyone runs out looking for a spot under the shade. 1 hr to relax before evening thinking about putting on our wetsuits.  It’s 24C (75F) which on any other day would have been awesome in Sweden, but today, before going out for our first distance Swimrun, I would have preferred 16C (60F).

The course is based near Stockholm, but very relaxing environment.

As time approaches 2 pm, all the competitors start grouping around the starting line.  Everything is checked-in, timing chips on, race bibs on, and now the only thing left to do is make it around the course.

Since Fredrik and I are slow runners we place ourselves in the last section of the starting field. The start goes, there is a pace car/bike so for the first 1km or so, we are just following the people in front of us, and no one seems to be trying to pass any one else. Once we reach the top of the “hill”, the speed picks up, the pace car/bike is gone and the group starts to split up.  By the time we get to the start of the first swim, we are the 187 team to get wet. That means there are 374 people in the water in front of us! So I yell to Fredrik that we should swim out to the right and swim around them. We move up really well the first 700-800m. Then we go under a bridge that is less than 4m wide and everyone is swimming shoulder to shoulder. Thankfully we were swimming with the current, so i was able to put my hands underwater and hold my head up to talk with Fredrik again.  We decide it best to go our to the right as soon as it is free, and again we are able to easily swim pass even more teams.  By the time we get out of the water we moved up to 34th! our first swim split 23:21 för roughly 1460m indicates how crowded the swimming actually was.

During the second flatter run around the eastern side of the lake, we get passed by 20 teams, but we are keeping to our race plan of swimming with long and easy strokes and running around 6-6:15min/km. We jump back into the water and manage to swim around 11 of the teams that just passed us on the running. As we get out of the water for the start of the third running we have moved back up to 43rd.

The third run is still flat along the lakes edge, so we can see some people still in the second swim leg. This is the longest run so far of the day, and we get passed by 30 teams this time. But things are still going as expected. As we get to the next swim, we again, take our time and swim relaxed and swim back up to 66th place. What a nasty place to have the swim up. the water smelled so bad, the bottom was not sand but some kind or mud/algae mix. I was nervous I was going to lose one or both of my shoes.

Either way, we get up and out of the water, and are off for the longest run section of the day, 4.1 km.  I was under the impression from those I spoke with about last years race that the course was flat. But from this point on, there was little to now flat sections. I don’t train for off road running, and I don’t train running up and down hills.  My back gave me an unpleasant reminder of that on the first slope. During this 4.1 km we went from 66th up to 130 😦

There was nothing I could do to run uphill, so luckily for me Fredrik is so laid back, that he was fine with having to walk with me on all the uphills no matter how small, and then jogging down the back sides. I was so disappointed in myself. I really thought that we could manage a time under 3:30 but had a realistic goal time of sub 4 hours. Just before the first big “hill” we were on pace to make 3:45-3:50. For the rest of the day, it is a struggle for me to run when the course was flat or downhill and then walk as fast as I could up hill. It was starting to be just as hard mentally as it was physically to go on.

Around halfway through the race I start getting dizzy, it is hot, I am sweating like a pig, and running in a wetsuit is new to me, us.  There was only a depot every hour or so at our tempo and I had only taken 2 gels with me thinking there would have been plenty of drink and food along the course. Being hot and dizzy, made going up all the hills even harder. By the time we get to the last depot they are out of food. I drink about 500 ml of water and we push on. I am not sure if the dizzy feeling was dehydration, or the fact that this was the longest I had been active with out wearing my glasses.

At the start of the last swimming which was suppose to be 420 m, we are in 162nd place. We swim past a few teams, and when we get up for the last run, we had decided that Fredrik would help me pull down my wetsuit. Since we had to keep our bibs on at all times, we did one arm at a time. So for the final 3.8 km I was much cooler and able to stay more focused, but it was too late, I was low on energy and water and my left calf started to cramp up. As we see our time go over 4 hours, we decide to push for under 4:30. Thankfully Fredrik was still fresh and we ran/walked over the finish line at 4:28:32, finished 126 amount the men’s teams, and 187 overall.

I have now done two 300 km bike rides, an Ironman, three 21+km swims and ran a marathon six weeks after breaking my collarbone, but I have to say this was the toughest 4.5 hours in my adult life! Seriously, it would not have been so bad, if we could have had our bibs under the wetsuit during the swimming, so it would be easier to pull down the top before each run, or even allow people who can swim, to race with out a wetsuit.  In swimming and triathlon there are water and air temps that determine if wetsuits are allowed for swimming, I think for the safety of the participants in Swimrun, a max air temp should be considered for running with the wetsuit up. If one requires participants to pull up and down the wetsuit at each transition it would be the same for everyone.

Also I found the 10 m rule to be neglected. Teams were to stay within 10 m at all times. But we were witness to several teams upwards of 15-20 m apart on the runs.

No littering was also a rule several teams/people didn’t understand, since we ran passed empty gels for the last half of the race.

A big thanks to TYR Sverige for our race equipment. Our matching Hurricane C3, Special Ops 2.0, Catalyst paddles and Hydrofoil pull buoy worked better than expected!  Thanks also to Dynamic Training in Växjö for keeping Fredrik and I fit for fight.

TYR Warriors (Fredrik & Ryan) after the finish or our first, but definitely not last Swimrun!! 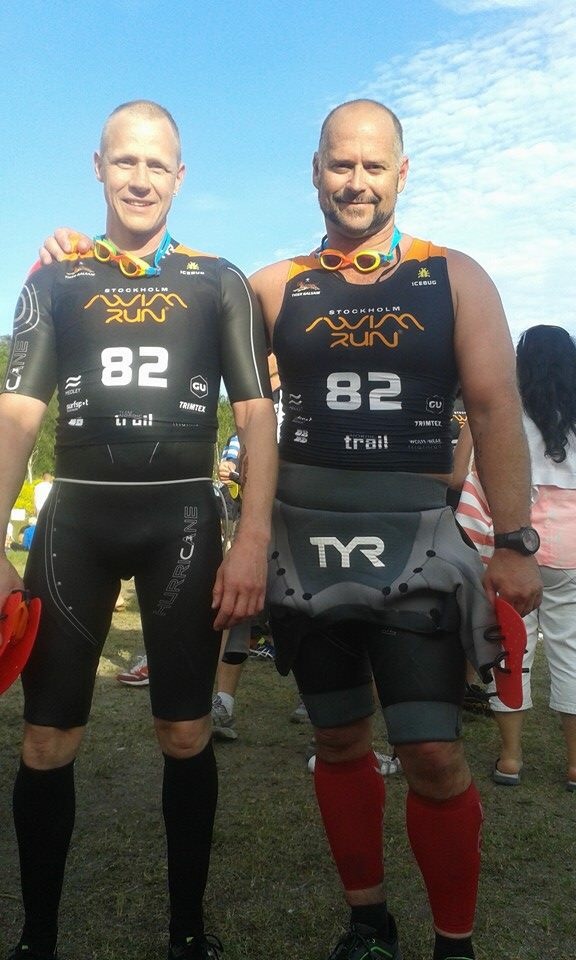 I am not sure what happened to my back during the race, I don’t like to make excuses, but my 6+ hour flight from Dubai the day before and 5 days of no real training in the 38-40 C really was not the best way to prep for a race like this.

Either way, we are both happy that we finished, and we are looking forward to improving in our next race, Kustjagaren the 4th of July.