It is amazing how many Swedes look forward to mid-summers eve. I have lived in Sweden since 2001, but this was my 16th mid-summer in Sweden, and I can only remember it being a nice day 2-3 times max.

So the topic of the majority of conversations the week building up to mid-summers eve include, who are you spending the day with, where are you going, and something about the weather.

Below are a few jokes about Swedish summer. 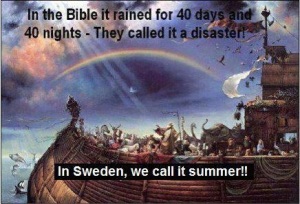 Either way, Thursday night I take Lily to her first triathlon of 2015.  She loved it. It was scaled for kids.  She swam 75m, then bike just about a mile and then ran just over 300m. She looking fwd to her next race already. It was the second year in a row for her to do this race, and the second year in a row, she was alone. I am really hoping that next year more kids will come and give triathlon a try. 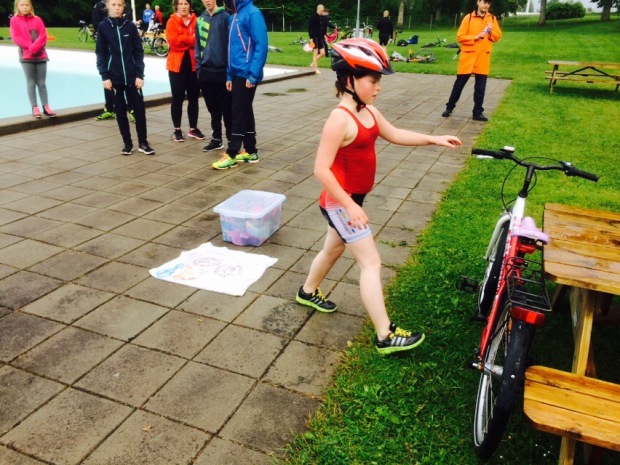 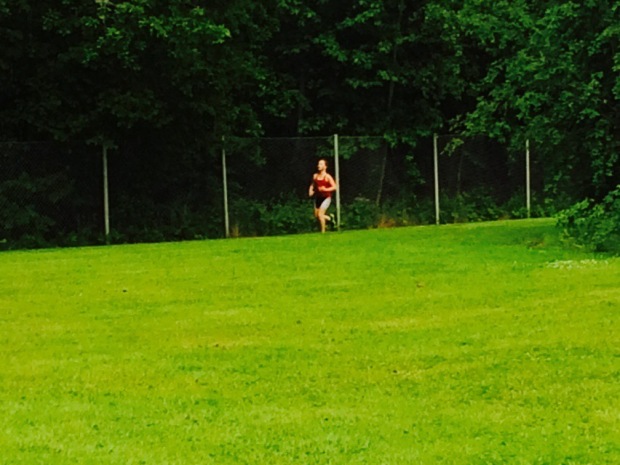 Friday morning I meet up with some other early birds for a swimrun practice in Växjö before everyone left town. When I get back the family heads about 60 miles south to be with the in-laws.  Luckily for us, there are two large party tents set up.  But the kids really enjoy the 45-75min of sunshine.  The rest of the time is spent under the tent eating and drinking. The girls played themselves tired.

Normally we set up camp and sleep over, but with the cool air and rain, we decided to drive home Friday evening. Their grandma convinces the kids to sleep over at her house, so Jeanette and I go home alone.

Saturday we get to sleep in until just after 8am, then I go for a swimrun workout with Jonas, a local legend of swimrun. He’s got so much energy and talent, it’s great motivation to get a chance to workout with him.  He makes it look so easy, while I am huffing and puffing the entire time, he must be thinking, how the hell am I going to be able to carry Ryan back to the car. It’s a short but intense (for me) swimrun around the small islands near by.

After our swimrun, I get back in time for lunch, and then instead of relaxing and enjoying our kid free day, we head up to the attic to sort. The attic was just filled with things during the move, and the days following, but now, everything is in place and Jeanette can sleep better at night 😉

Just before dinner the girls arrive home, and I BBQ some hot dogs and make sure they can grill marshmallows after they finish eating, before I head out for a crossfit workout.

Met up with Marcus, Mathias and Nathalie (who wrote to killer WODs) at the box. After about 20-25min or warming up, we pushed through the two WODs. Marcus and Nathalie pushed each other neck and neck the whole way, and Mathias and I did the same, even if we were a few reps behind them.  The second WOD killed me, and Mathias hit the wall as well.

Sunday morning, the US Fathers Day, we took the girls out for a hotel breakfast.  Nothing beats a hotel breakfast, especially one for free. Both Jeanette and I managed to get in our workouts on Sunday, and even though the girls didn’t really deserve it, we took them to the circus. I think this is the 3rd or 4th year in a row we have been to the circus on this weekend. It’s fun and cheap and best of all nearby and only 90 minutes.

The girls only have two weeks left of “summer school”. Lily spends her days this week at soccer camp, while Iris goes to swim camp. Then from the 3rd of July until the 17th of Aug, they will be home.  Since we are planing a longer Christmas vacation we will only be planning a few day trips this summer. But our girls get just as much or even more out of a few day trips as they would if we went away for 2-3 weeks. Since we can always go home and reload before the next big thing.

Less than two weeks until my second Swimrun race of the summer. I hope that I am better prepared this time.